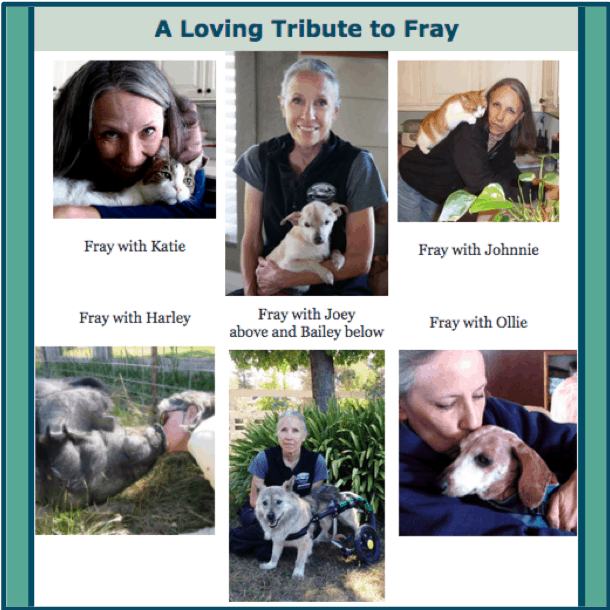 BrightHaven President and Founder Gail Pope shares her heartfelt tribute to Fray:
“Somewhere around the beginning of 2003 we welcomed a new volunteer to the BrightHaven fold, Fray Huffman. After 17 years of devoted and unwavering service to the animals to whom she dedicated her life, I find it still hard to believe that Fray died onthe morning of Saturday, May 30, 2020, of long-term lung illness related to rheumatoid arthritis.
Fray could charm the birds from their trees when she so wished and was the most excellent listener the world has ever known. One of her most favorite things was to engage in deep conversation with an expert, discussing such topics as world politics, holistic health or ethics. Fray was not shy about sharing her opinions, and could be a bit of a bossy boots at times :-)
Fray’s heart was always with the animals, and she worked tirelessly and endlessly for those needing her care and attention. Her first great BrightHaven love was Harley, our 800-pound hog. She tended to him selflessly night and day, come rain, shine, frost or fog, until the day he died in 2012. We knew a part of her died with him.
Perhaps Fray was saved at that time by her second great BrightHaven love. His name was Bailey, and he came to live with us in 2006 after being hit by a car on the streets of Taiwan. Bailey – a street dog with a broken back who was feisty and somewhat unpredictable – fell in love with Fray, and she with him. Soon the pair were inseparable and became well known for their walks, with him in his wheelchair (or chariot as it became known!) and her doing her best to keep up with him.
Bailey filled her heart with joy and after the sanctuary closed in 2018 and Bailey moved with Richard and I to the desert in Southern California, Fray relocated nearby to be with her boy. In early 2019, Bailey’s health deteriorated as had Fray’s condition. She could no longer care for him and so he came back to live with Richard and me for the remainder of his life. Fray joined us on Bailey’s last day, when he managed a few steps in his wheelchair out on the grass to enjoy his favorite smells, after which he gratefully settled in his bed, accepted a few treats from me along with a few sips of water. Bailey then relaxed and lay down with Fray to begin his journey to the afterlife, taking what was left of her heart and strength with him.
Afterwards Fray continued to volunteer with BrightHaven, but her own health declined quickly until she required oxygen by day and night. Refusing all help, she allowed Mother Nature and her strong determination to guide her path. Fray left this world as she lived – on her own terms – and chose to leave to be with Harley, Bailey and the many BrightHaven animals who trod the path to the afterlife before her.
Some of my fondest memories of Fray are the overnight vigils we shared. I cannot begin to count the long nights that Fray kept watch with me as one of the cats or dogs lay dying. She gave of herself so selflessly but found it difficult to accept the same in return. Even in those days when it was obvious that Fray’s health was failing, she preferred to help others.
Daily life now has changed, but I continue to find Fray’s mark in our home and stop often to think how Fray would have commented upon this or that or how she would’ve eagerly shared details of my work in consultation. She adored and enthusiastically absorbed knowledge like a sponge throughout her life.
I would like to mention just a few of the special people to whom Fray meant a great deal:
Fray’s family, including David, Bonnie and Judy, along with our family members Kirstie, Dave, Emma, Justin, Crystal, Luke and Lexi; friends and volunteers including Jean, Blanca, Vicki, June, Wanda, Barbara, Bonnie W., Fran, Elke, Carol, Kathleen, Leah, Lynn, Ella, Chris, Tom and Sheila.
I know everyone will join Richard and me, our animal family and other friends and animals both near and far, in sending love, gratitude and prayers to Fray as she continues her onward journey.
Fray was an important part of BrightHaven for many years and will remain forever in our hearts.”

Here’s a lovely video of Fray and Bailey having fun on the BrightHaven sanctuary grounds.
0
0
0
0
0
0
Copyright: This document is © copyrighted and is the property of BrightHaven Inc. and it must not be reproduced or presented for commercial purposes without prior express written consent from BrightHaven.