My baby is gone. How does one deal with that? I don’t know. All I do know is that Furbs has been my baby for sooo long, and our lives have been filled with the care of his sweet self for so many years, that I am not sure what life feels like without him in it – very strange for now.

I am sure it will pass in time as loss does …For now though, I am bereft and watch over his bed daily still in case… It is hard to let go when one has been needed so much…

Our journey began way back when Furbee was a tiny kitten of only two weeks of age. Driving down a busy high street in Southern California, a rescue lady noticed something suddenly jettisoned from the window of the car in front of her, to land in the gutter. Driving by, she caught a glimpse of what looked like white fur…and so the story begins!

Furbee, so named by this wonderful kindred spirit Sharon, remained at the vet’s office overnight with massive head trauma and no likelihood of survival, but he surprised everyone by making it through the night.

They of course, did not know his destiny and mission, way back then! Sharon took Furbee home, seizures and all, to care for him for many months, while she sought help. Finally destiny brought BrightHaven to her attention, and fate did the rest.

Our Dr. Chris  Barrett began to work with Furbee during those dark days before he came to join our family and so he was already making headway when he met his new brothers and sisters.

Furbee turned out to be the most delightful addition to our already huge family. He walked in circles, seemed somehow dazed but curious, and his big blue eyes just shone with life and his enthusiasm for it. How could we resist? No one ever could!

People, hearing his story, would begin to cluck disapproval sometimes that he be allowed to live on with “all those dreadful seizures”…and then they would meet him and be somehow transformed and changed by his sweet acceptance, simplicity and understanding.

Could he see? No, we were told, but see he could. That was obvious!

He saw, not as most – but in a different way. We soon realized he could see and react to things around him, but perhaps the messages to his brain somehow became distorted, tangled or maybe illegible. He could learn and listen though, and soon began to find his way around.

Furbee followed my voice and, although sometimes had to turn in many circles along the way…would find me wherever I was.

As time passed so Furb’s seizures grew in intensity until one awful day when we thought we might lose him. He had 19 that day, resulting in a coma-like condition, and we almost gave up…Remedies prescribed by his wonderful Dr. Chris seemed not to help and Furbee could not stop seizing….until that one last remedy to which he responded.

During the days following that dreadful one, Furbee seemed to grow and change and become more mature. His personality grew, as did his adventuresome spirit and he was often to be found out in the garden. Sunshine would possibly have headed his list of most favorite things!

Trouble is, we soon learned that too much sun could provoke a seizure or, worse still, heat stroke, so we learned always to watch over him constantly and carefully.

Over time his routine became established. Up between 5am and 6am and, after breakfast and a stroll in the garden, it was back to bed till 4pm—and when I say 4pm—you could almost set your watch by his awakening! 4-6pm became time for strolling and interaction with the family, both humans and the other animals, who adored him.

It was a time to grow excited for dinner. Dear Furbee loved his food and in his entire life only missed one meal—that being on the day he had 19 seizures!

Once ensconced in Santa Rosa, CA, we suddenly realized our baby boy was to be a caretaker of others, particularly those in their dying process. Sometimes he would manage to climb into bed with them, but mostly they would seek him out and snuggle in his bed.

In all honesty, it was only in the last several weeks of his life that I realized Furbee suddenly seemed to have grown old. He had been in mild renal failure for a while and still had his seizures, but now he started sleeping more and having diarrhea and occasionally throwing up – just not him.

The illness came on slowly, gathered speed and before I knew it, I was facing our final moments.

Through it all our Fur-baby remained calm and peaceful, sleeping mostly, enjoying cuddles and even taking small amounts of food and water quite often. His seizures, which had vanished in the last weeks of life, did not return and for that we were grateful.

His passing was as sweet and gentle as his life, and I will be forever blessed by the memories of my little boy who greeted each and every day with a serene smile, never once complained about his lot, loved all others more than himself, judged not and lived his moments in love and always with gratitude and joy.

Angels can fly because they take themselves lightly. 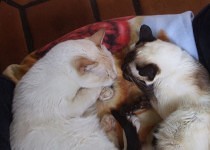 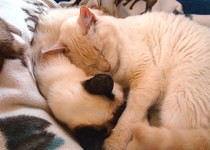 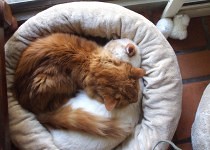 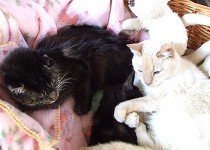 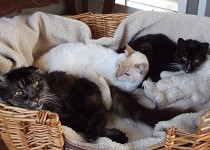 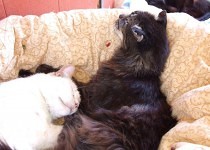