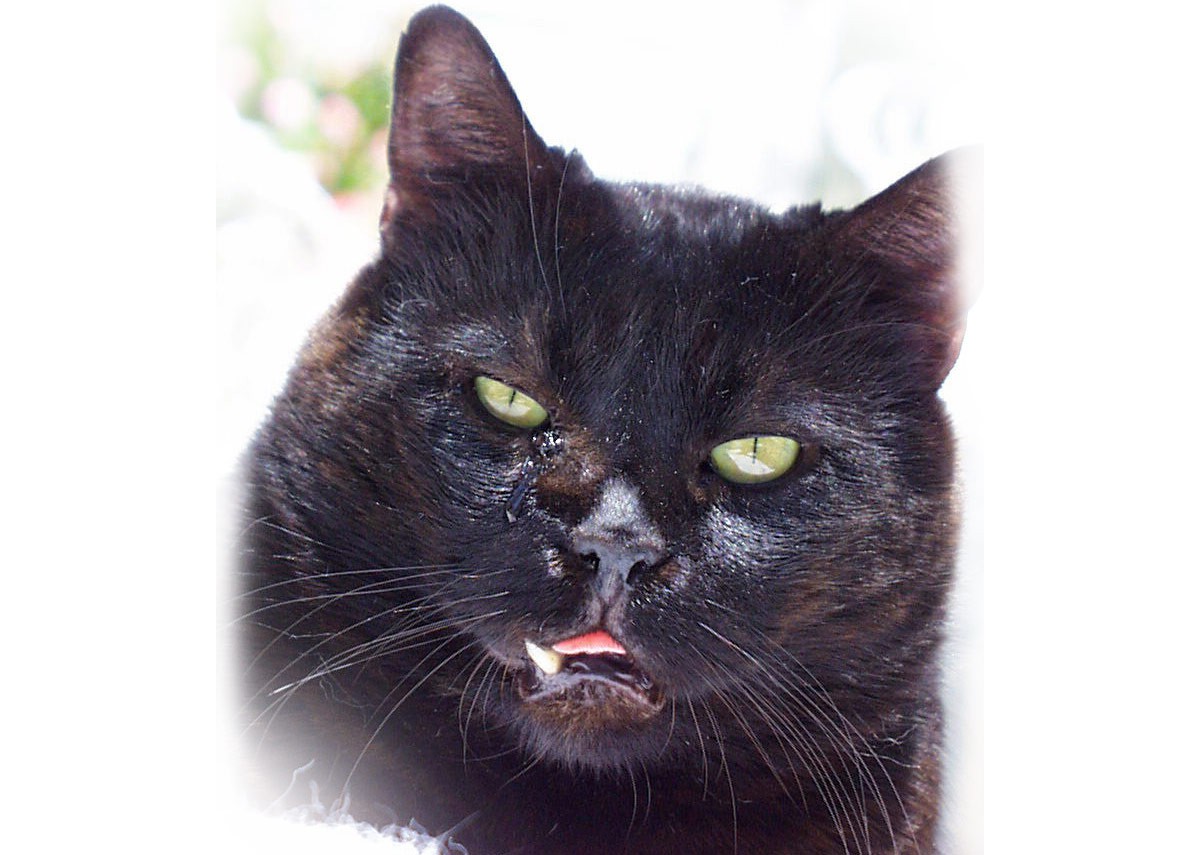 Barney was born under a bush in the cold and rain—left there, perhaps by his Mother, because he was different from the rest of her litter. His left rear leg was only a short stump and his jaw all twisted sideways, but he was alive and ready to see what this new world had to offer for a fine little handsome scoundrel.

Happily he was found, and finally, when he was almost three years old, came to BrightHaven, or as we were then known— “Cats are People Too!” He was sweet, shy, black, and scruffy, with awful sinusitis, a green discharge running from his eyes and nose, and a hacking cough!

Apart from that, he wanted very much to live and enjoy himself— so how could we deny him the chance? We vowed to give him the opportunity and, giving him a quick scratch behind his left ear where a cat with no rear left leg could ever reach, we began by calling the amazing Christine Mattson-Barrett D.V.M. who, of course, fell instantly in love with this little bundle of chubby fun and resolved to restore him to health—a resolve she completed to the admiration of all who knew this boy—The remedies, love and natural diet slowly but surely stopped the discharge, sent away the cough, improved his coat and turned this ugly little duckling into a shiny sleek and handsome, if not overweight, swan!!

Barney came to BrightHaven with his three friends Mick, Marie and little ‘Lisbeth. A motley crew they were; The charismatic Mick, ignoring awful IBD. His own person and in instant charge of BH admin work!! Even the tough guys of the rat pack bowed to Mick. Sweet feral black girl, Marie—always smiling and finally accepting our love. Then, the ever dear and delightful little ‘Lisbeth with her tiny deformed feet and eyes that saw so little.

Everyone called her Miss Tippy-toes. Adorable—as were they all. Barney fast became a formidable force as he learned quickly how to get his way with all beings, mainly with the simple use of his one strong fang, which he used in similar fashion to a rhino’s tusk. Heaven help you if dinner was not served immediately at the sound of Barney’s familiar grunt. We have all been gored in the leg or elsewhere, as our reminder that we were, after all, only the servants here!

Barney moved happily from Southern to Northern California and then took the subsequent move to Santa Rosa in his sunny stride. Loved and cherished as a naughty bundle of fun, he loved his life and many friends. In later years he wore his seniority well and turned his attentions to those in need. Some would have seen him by then as also one in need…but Barney never needed anything—just to love, honor and cherish his friends, who numbered many.

Caring for Trevor He loved and paid respect to them all. The last picture on the previous page is Barney with Trevor: Left with Ollie. Below that he is with Charlie, watching over Beauregard together. Charlie and Barney have been the Romeo and Juliet of the last BH era. They have slept, eaten and lived together by day and night. They shared in the lavish care of Ollie, growing steadily closer and were there in Beauregard’s last hours.

The next charming photo is one of my personal favorites: Barney pictured with his buddy Bentley, with whom he shared so many good times. Each had many parts not working or broken—but never their spirits!

We have been moved to tears many times in recent years, to see this fat, wobbly old chap cuddled tight in bed with dear brain damaged Furbee, and only yesterday they again cuddled tight. In the last few days Furbee seizures many times and Barney, as ever loving and protective, was there for him yesterday, even though he must have known he was dying. See their sweet picture at the bottom.

The night before he died, Barney came to bed with Gingi and I. Gingi tried valiantly to groom his old friend in farewell. The next day saw Barney with old friend Charlie for a last farewell. Yesterday we cried as Barney crept peacefully into bed with dear Furbee, snuggling close all day until Furbee arose to answer the call to dinner.

Barney remained in bed and I then I noticed his breathing altered and pupils growing large. True to his delightful personality, Barney took a little of his favorite medicine which I offered—as he loved it so…licking eagerly as usual from the syringe. He happily ate a little pureed natural diet. Food had always been one of his main delights in life. Perhaps a little snack was needed for the journey! Mid evening saw Barney relaxed and sleeping…face down. I knew that time was short. Richard and Fray joined us on the couch to sit and chat about old times and old friends.

We talked about the waiting ‘Lisbeth, Mick and Marie, along with all the BH rat pack—the gang he loved so much.

He held my hands tightly, squeezing me with his paws clenching to emphasize his loving farewell. Then, gazing into my face with love and understanding, he gave a few delightful “Barnacre” grunts and, within 5 minutes, had gone to join his friends. 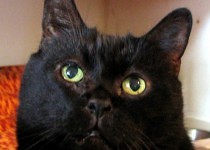 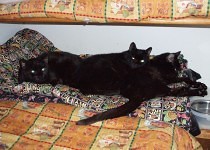 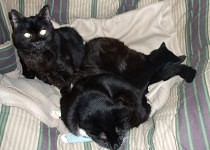