Farewell my good master, homeward I fly;  One day thou shall gain the same freedom as I.

Today I am emotional and finally struck by profound tiredness after the long weeks, months, and, well years…spent trying in vain to save the life of this oh!! so sweet young man.

It is hard to find words and yet I know many of you will truly empathize as I tell the heart wrenching story of one who died so very young.

When in the very prime of his little life at around 1 year of age, Bentley was involved in a car accident and suffered a broken back, resulting in paralysis from the waist down.

He came to live here with us, initially sad, depressed and unwilling to face the bleak future. Being a cat, Bentley soon changed his thinking and became our huge inspiration as he bravely taught himself to walk, laugh and play again.

His infectious spirit became our delight and he appeared to be growing healthier daily. He soon made cat and dog friends too numerous to mention, and I am happy to show you just some of the cute shots we have of him with friends.

We valiantly tried to forget that back injuries bring with them a variety of health problems and Bentley proved no exception to the rule. His excellent diet and homeopathic healthcare appeared to have produced a young and invincible gent until, almost two years ago Bentley’s bladder started to bleed in an extremely rare condition which brought with it so many complications.

Many of you will know how our amazing friend and classical veterinary homeopath, Dr. Jeff Levy stepped into the brink and worked so very hard to save him and for many months we saw our boy improving and full of happiness, love and what seemed amazingly good health…but sadly the chronic anemia of his condition suddenly caught up and Bentley boy crashed. Again he responded to critical around-the-clock care and, against all odds, pulled through again.

Several months ago Bentley moved into Richard’s den and became the centre of my life. His bladder needed catheterizing often; as many as 6 times daily and he was unable to eat by himself. Beauregard, Oliver, Ginny and Stefanie became his team. I sought the advice of Board Certified specialists who sadly confirmed we could do no more. Then against all odds, Bentley’s paws returned to pale pink and the anemia began to recede. Another BrightHaven miracle? We were joyful, but that was short lived as we saw his heart unable to respond.

Well, believe it or not—again he responded to remedies, came back to me once more and his heart returned to a happy normal beat…Life was sweet.

What a roller coaster the last months have been and, in all honesty I knew that time must now be short, but, with Jeff by our side it seemed that this boy was now invincible. With Oliver, SuzyQ, Ginny and Stefanie by his side he never again wished to leave his new den, except for his delightful surreys into the private garden beyond. He loved to go and sit dreamily in the spring sunshine and lazily watch Harley the hog and the goat girls.

He was ready to go—I knew that, but we were not yet ready to say goodbye.

Many of you will know of my special love for Tim…and over the last months the spirits of them both have become inextricably mixed in my mind and I just could not bear the thought of letting them both go—even having Tim’s obituary still posted on our angels board. Very recently Bentley even told a Reiki student in communication that he was ready to go and that Tim was with him. It was all up to me!!

Just yesterday Bentley’s bladder bled again and, as usual he carried on smiling and eating, but he hurt a little and during the day began refusing food. He put his head down tiredly and I called Jeff who immediately raced to help. This time Bentley did not respond. There was no more to be done.

You will recall that Gingi is one of our great leaders and, either he or Beauregard or both, are always present to help as someone leaves. So, when Gingi joined us on the bed last night, I knew for sure that it was time. He called Oliver, Ginny, Stefanie, SuzyQ and Sophie close and we began our vigil.

Through the long hours of the night Gingi never once left our side and once again I was humbled by his love and devotion.

At 3am Bentley awoke suddenly and began his journey in a storm of neurological activity. I called out to Richard and then joined by Fray, we all said goodbye to this wonderful boy who leaves such a great void in my life. 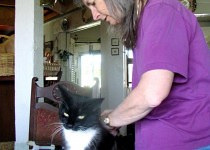 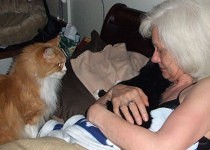 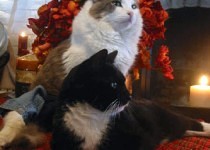