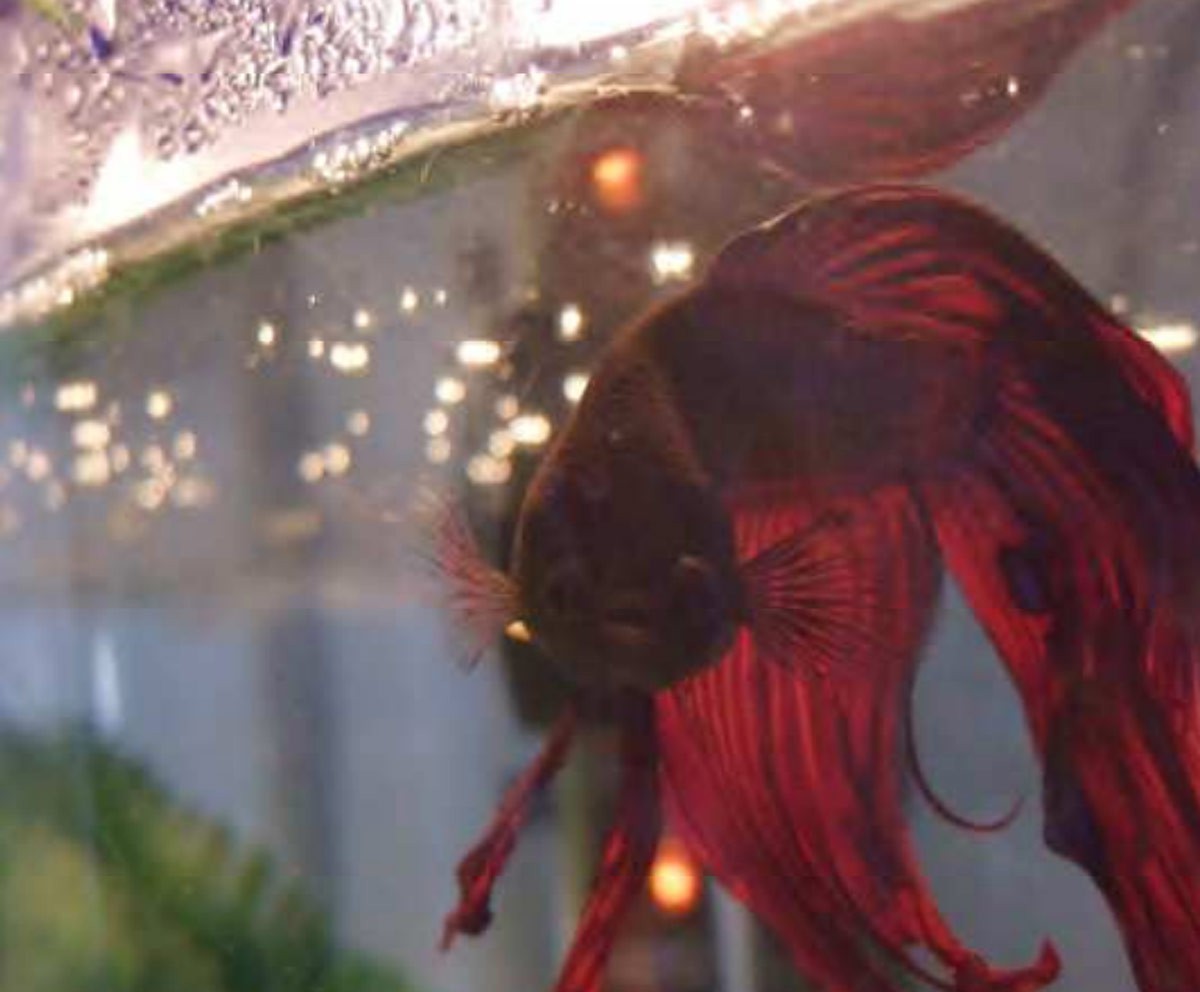 This is the story of Duke, a tiny Betta fish with the heart of a lion.

It was April 2010. I had lived in my current apartment in Somerville, MA, for a little over six months and I was a happy cookie since my pesky, slightly weird and smoking (literally, not figuratively) downstairs neighbor had moved out a few weeks previous.

But why did I keep hearing disturbing noises coming from his apartment in the middle of the night? Sounded like a cat meowing… Several times I went out on his deck, which I had access to, flashlight in hand, looking in through the bedroom window, calling the imaginary cat, listening. Nothing. Finally I decided to call our miserable-old-Scrooge landlord to ask him to check out the apartment, which he promptly did. Evidently the tenant had not informed Scrooge of his departure and to top it all, he had left all his junk behind in an unbelievably filthy apartment. Scrooge came to show me the crime scene; he was probably scared of literally encountering skeletons in the closet and needed backup.

Upon entering through the doors of doom, the first thing I saw was a small fish tank in the middle of the dining room table. In it were two small Betta fish, separated by a divider. I could not believe my eyes; after all, the guy had been gone for about a month. How could these creatures have survived without food or heat?

I scooped up the tank, consulted with my neighbor Iris, a fish parent herself, and together we changed the water, plugged in a heater and started treating one of the boys, who was obviously in dire straights. I thought Duke would be a suitable name for a handsome, burgundy red and dark purple man who exuded a certain air of composed dignity. Unfortunately said dignity was a tad disturbed by the fact that he was floating on his side most of the time. His brother, who seemed friendly, yet mildly klutzy, I named Marvin.

What did I know about fish? Not much. Years before I had rescued a group of fish from a youth hostel, where the poor babes had been subjected to having bars of soap and beer bottles thrown into their tank. They lived with me for a number of years, but I had vowed never to have fish again – too stressful. I was in doubt that I was doing everything correctly and always scared that one of my charges would drop dead on me.

Can you remember a world without Google? Me neither. Google taught me all I needed to know about what turned out to be Duke’s swim bladder disease. Nothing that a bit of tea tree oil and salt could not fix. And sure enough, after three days of treatment, a cozy water temperature of 80 degrees, good food and some TLC, Duke recovered and started to swim normally. Victory!

After a very half-hearted effort to find the boys a new home, I embraced my new role as proud Better mother and went in search of more suitable accommodations for the new additions to my family. A ten-gallon tank with all the trimmings (lights, filter, heater, gravel, plants, divider, etc.) was purchased, complete with a brand new set of bedroom furniture. This furniture came in the shape of two hollow, floating Betta logs, with breathing holes in the top. Best purchase of my life; they grew to absolutely *love* their logs and would go to bed in them without fail every night, upon lights out. Later it transpired that the log would make Duke’s life much easier, as I will explain.

For some time we all lived happily ever after. I formally introduced the cats to their new brothers, however Lulu and Diva showed nothing but disinterest. Probably just as well. Later in the summer I started to notice that Duke was getting bigger. I did some research on feeding and found that I was probably feeding them too much, which, to the boys’ utter dismay, resulted in the cutting down of their rations. It did not make a difference; Duke was still getting bigger. Back to Google research and the possibility of constipation. At this point I decided to put him in a “hospital” tank, the 2.5 gallon tank he and Marvin had originally come in. It was easier to treat him and monitor his toilet habits this way. I fasted him, I gave him Epson salt baths, I fed him cooked pea, I lowered the water temperature, raised the water temperature—nothing. Apart from having a distended stomach, Duke was doing great; he was eating and swimming and happily waiving his little wings at me—just like he always had.

In October he was so big that his ability to swim properly was somewhat affected. I consulted with Lulu’s homeopathic veterinarian, the wonderful Dr. Laurie Lofton, who prescribed a homeopathic remedy that obviously worked for him. He had gotten ravenously hungry and would hang out at the bottom of his tank, but his behavior normalized after being given a dose of Lachesis 30c. Not so his grotesquely distended stomach though.

Finally I came across a blog entry on a Betta site where someone was talking about aspirating their fish with a tuberculin (insulin) syringe. Of course I had to try it. I put him in a Ziplock bag, with very little water and poked the syringe through the bag into his stomach. He was obviously too surprised to struggle and I managed to draw out some pale yellow fluid. It tested positive for ammonia, which lead me to believe that he was likely to be in kidney failure, probably as a result of a bacterial infection.

Though the procedure was incredibly stressful for him and, most of all, me!, the result was well worth it. The edema went way down and he looked almost normal. He was so much happier, more active, breathing better—I was so pleased! He was even feeling frisky enough to flare at me

Bubbles(flaring is a Betta’s way of trying to intimidate his opponent. Not very flattering for me, but it showed that his spirit had returned full force).

I was not sure how long Dukie would still be with me since kidney failure may not be reversible and I knew that the edema would reoccur. Still, I hated seeing him in that small tank without filtration and I went out to buy him a nice five-gallon home, with all the extras. I figured that even if he only had another week to live, I wanted him to be comfortable during his remaining time. As it turned out, he obviously had no plans to go anywhere at that point.

The months that followed were spent aspirating him every four weeks or so, which became increasingly difficult. At times I had to treat him for constipation. I took great care keeping his tank clean and giving him loving attention. I would put my fingers in the water and caress him as he swam around my hand. He liked that.

Never would I have thought that I would provide hospice care for a little fish. Duke and I developed an incredible bond during all those months of care; he was the first one I would check on in the morning and the last one to say a good night to before going to bed.

In February he started to decline. He had developed a pronounced lump on the left hand side of his body; probably a tumor. The lump started interfering with his ability to get around because he constantly had to struggle against the uneven weight. I tried various treatments, but to no avail. Eventually I gave him the same homeopathic remedy he had had before, in a higher potency, but it proved to be too much for him. He crashed and became unresponsive. I put my hands on the tank and gave him Reiki several times. He would even hang out in the palm of my hand, receiving his Reiki treatment. The next day he was back to where he’d been before the remedy.

A few days later he crashed again, looking very end-stage. I consulted with Dr. Lofton who prescribed another remedy. It did not take long to see the effect; the same night, he was hunting hungrily after his food and the next morning he was pretty bright and perky, albeit very debilitated. Homeopathy really is the single best method of treating a sick animal, in my opinion!

At the time of this writing Dukie is still with me. I give him Reiki regularly and most of the time he hangs out in his floating log. The log protects him from even the faintest current and all he has to do to breathe on the surface is stretch his neck up—I’m so glad that his house makes it easier for him. Once in a while he goes through a spurt of activity and swims around with considerable effort, only to eventually just sink to the bottom. He is having trouble getting his food before it sinks, but he has learned to eat off the floor, so to speak. The lump is pretty enormous now, but I feel that Duke is peaceful.

I have cried many a time at the thought of losing him. To me he is not just a fish, a toy that you buy at the pet store for a couple of bucks and stick in a vase for decoration. He is my “child,” one of the wonderful beings that I share my life with and whom I love. Duke is an extraordinarily gracious creature, always forgiving me for the stressful treatments I put him through and always happy to see me.

He has been a docile patient, never making my job more difficult than necessary. Before he became so debilitated he was curious and eager, nibbling at my fingers, enthusiastically jumping at his food, darting around his tank and clearly enjoying his life. A far cry from those poor listless and unhappy Bettas you often see stuck in a tiny container on some office countertop. I sincerely feel for them all.

Having read many Betta blogs and forums, I now realize how many other people feel exactly the same way about their fish. It is heart warming to see the testimonials of love and read about the efforts that people go through to help their little ones. I wish that everybody could see these often-abused beings through our eyes. There is no doubt that fish are sentient beings too, each with their own personality.

Many of my friends and family have taken part in Dukie’s life by often asking about his wellbeing and expressing their concern for him (my mom is his biggest fan). I’m glad they do, because it means that his life has validity in their eyes too. 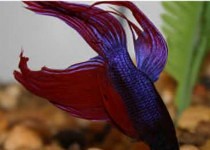 Duke in his prime 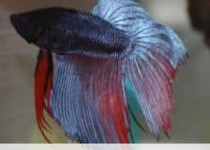 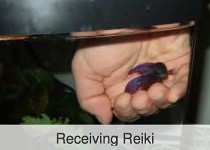