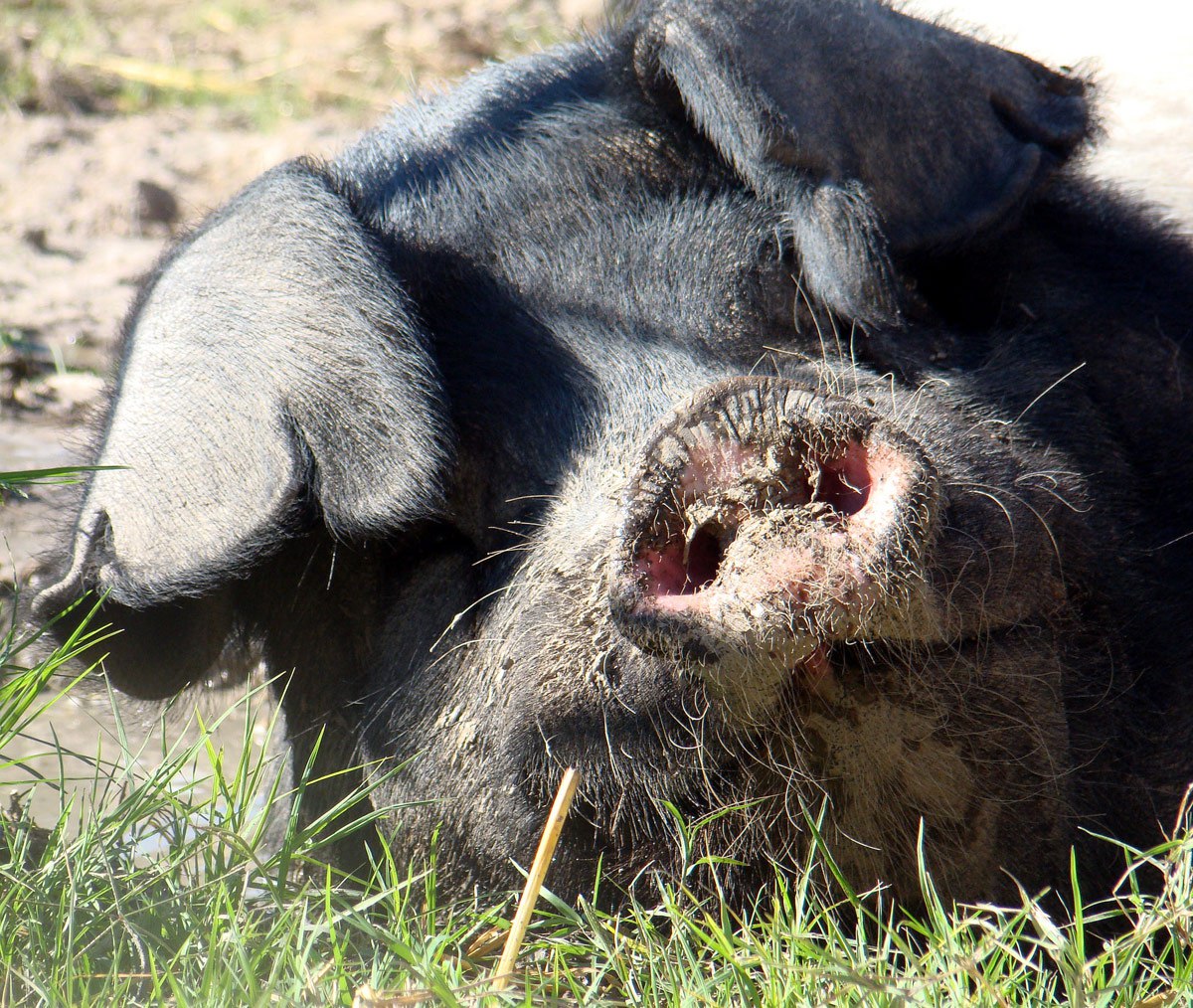 Libby, one of BrightHaven’s long-time volunteers came to visit one day, telling us she had promised to rescue a sweet pig who was on his way to becoming “a bunch of Christmas hams” and now she did not know what on earth to do with him, as her own house and yard was hardly big enough for her dog! “Speedy” as he was then known, started life as a 4H project, where he was raised by children, fattened up and then taken to market to be sold for slaughter. Even though kept in a very small pen, Speedy was always cruising around and consequently could not put on enough weight, and so when he finally went to market he was unable to be sold as he was underweight…Bummer for the 4H group – great news for Speedy!!

So, Speedy dodged the Christmas feast and would not be sharing a plate with over-easy eggs, but would live at BrightHaven where he would be loved, respected and taken care of for the rest of his “Hog Heaven Life”. November 29th 2002 was a quiet, serene and tranquil day, until…the horses, ducks, chickens, dogs, goose and goat froze as they heard the sound…faintly at first…a low rumble, followed by a few grunts…and then over their horizon cruised Speedy, and the chaos began!

Speedy lived initially in a small holding enclosure built by the 4H group, complete with a little pig cottage, and that first night he went into his house and slept… and snored… and snored, sounding much like the rumble of a motorbike. Then, along for a visit came good friend Jack and his large group of friends on their Harley Davidsons. They loved meeting our “hog” and explained to us the long-standing nickname that HD owners have for their “Harley Owners Group”—the acronym HOG!! A great fit we thought—and so Speedy became known from that day forward as “Harley.”

It was decided that any self-respecting hog should have a decent size garden and, after much negotiation with the dogs, goats and ducks, an area was designated just for him. Fencing was purchased and the great day came when Harley finally had his own huge garden where he could run, roll, jump, snort and dig to his heart’s content. He soon discovered his ability to lift fences with his snout and sometimes even uproot the occasional tree…Oh Lord!!!

One morning, just six short months after his arrival, Harley was clearly feeling unwell and was unable to stand up. Eventually he managed to heave to his feet but was clearly evincing pain when walking. Happily the problem resolved in just a couple of days of homeopathic care, but those days were to herald the start of his long-term troubles. We had been warned he may eventually experience joint, back and muscle weakness, having been a product of over breeding, or “fattening-up for market”, and knew that consequently we must do all possible to keep his weight down by feeding him the best diet possible.

Happily, in the nick of time, along came Fray Huffman to volunteer to help care for him. In no time at all, hog and lady had fallen for each other and Fray soon became the light of Harley’s life, caring for his every whim…and berating those wishing to give him delightfully fattening and naughty treats…!!

Harley’s first two years were filled with little health issues, although fortunately his response to homeopathic remedies was remarkable and by 2004 he was so much stronger, with the incidents fewer and further between. That year, BrightHaven relocated to Santa Rosa, CA, and of course, Harley came too. It was only around that time that we suddenly realized that our little cute pig had grown and grown and grown!!! Harley was now a handsome and giant adult, probably weighing over 700 lbs.

Talented Dr.Laurie Lofton took on the role as Harley’s homeopathic veterinarian, and local large animal veterinarian and friend Tere Crocker fell hook, line and sinker for her most adorable new patient, stopping by at every available minute to share a story or two with her man! In the ensuing few years there were times when Harley gave cause for concern as he experienced great difficulty, not only walking, but also standing or sitting. The weakness in his back end was also visible now in his shoulders and, although still showing great responses to homeopathy, his strength was clearly and very slowly diminishing. His friends on the other hand were growing daily as his fame spread, and his fan club overflowed!

This chubby-faced guy loved visitors and made friends with everyone who crossed his path, especially if they came bearing gifts. He once told animal communicator Cathy Currea that he loved his big red ball…later it transpired he actually meant the huge red apples I bought for him. His other great love turned out to be french fries, discovered by good friend Keri Lepperson, who, after sharing lunch with him several times, soon realized it would not be wise to arrive empty handed in future!!

2008 proved a very difficult year for Harley as many more times he could only sit up, but not stand or walk. He ate well, loved his treats and was clearly very happy but we could not stop our thoughts from wandering to that time when he could not sustain life this way…

All avenues were explored and we immediately realized a wheelchair of any sort at all would not be possible for such a huge animal. The future was beginning to look somewhat bleak for the boy who could no longer walk most days. Time marched on, with Harley’s strength and ability to stand and walk fluctuating wildly, until 21st September 2008 when he could not get up at all. Big H was down on all fours, lying on his side.

After spending time in his mud hole just outside his house, Harley decided it was time for a new home and spent the next couple of weeks gradually scooting to the other end of his pasture to his final spot – under his favorite tree. Once it became clear Harley was not about to return home we were again faced with our own demons of worry.

Was he suffering…too right, we mused – he must be. Was he in pain? Hmmm – tough to tell. We had tried various meds and pain killers too, but could not see a difference. Was the pain and suffering in our minds but not his? What about his quality of life? He could eat and drink and talk and sit up and enjoy our company, but was it all enough? We were informed that he actually could not live long in this fashion, as large animals cannot sustain life lying down. Kinder to quickly put him out of his misery they said. Harley seemed to say an emphatic no. And so we waited and hoped and prayed. Vets, chiropractors, energy healers from all walks all came to help – even Animal Control came to see what we were up to!

The next months brought periods of ups and downs until, finally we “got it”!! Harley had not the least modicum of concern – taking each day as it came along and greeting it with joy. He scooted easily, spent happy hours relaxing under his favorite tree, was hand fed twice daily by Fray and received early morning treats from me. Water was constantly on hand to drink from the garden hose and we saw that Big H was “happy as a pig in sh*t” as the old saying goes!

Back in 2004 BrightHaven began the expansion of its educational program by offering animal Reiki classes taught by Kathleen Prasad of Animal Reiki Source. A 750-pound hog can be somewhat nerve-wracking for the uninitiated, but Big H lost no time at all in captivating even Kathleen’s most nervous students with his charms and his willingness to receive Reiki – soon becoming known as a Reiki sponge! He became so famous that new students arrived expressing their fervent desire to meet this celebrity! Harley adored the gentle healing energy shared in Reiki and we noticed that those who came wishing to offer him healing, generally left with the understanding that somehow their own lives had been changed and healed instead.

Life is not about waiting for the storm to pass…it’s about learning how to dance in the rain! 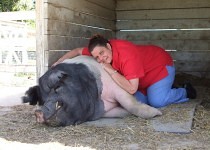 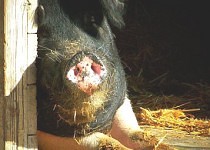 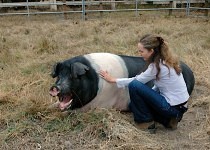 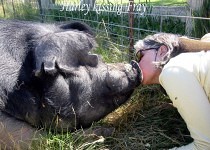 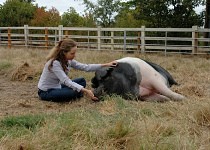 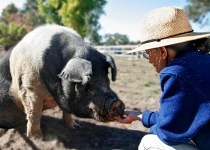