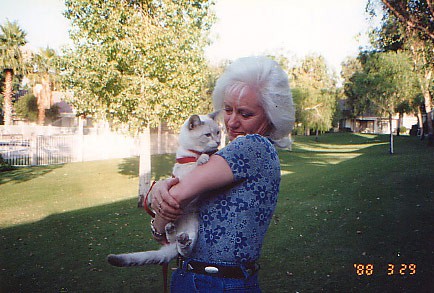 A story of love, courage and triumph.

There is a place called BrightHaven”. It is an animal retreat. Its name describes a feeling which is experienced by every person once its story has been learned. BrightHaven has magic. BrightHaven typically accepts only animals whose last hope is to find a miracle. It is that last place on a proverbial road land-marked by heart-wrenching stories of the experiences of the animals who find its gate—some small, some large—in which the heroes and heroines are the animals themselves. We, along with all who have known her, like to think that Sarah is a little angel whose spirit remains a guardian of the hopes and desires of the friends whom she left behind, at BrightHaven. Sarah came to BrightHaven in 1995 and in the 2½ years of her journey with us, changed our lives completely.

Sarah came to live with us at the request of a well-known author, who had heard of our work and prayed we could save her girl. She had tried the best that medicine could offer and hoped that our mixture of love, diet and homeopathic care would work a miracle.

Sarah was so beautiful she almost took our breath away when first we saw her. It was hard to believe she was so very ill, but she suffered an awful dis-ease called feline plasmacytic lymphacytic stomatitis, which attacks the mouth tissue and, back in those days, almost always resulted in euthanasia.

Those of you who adore cats will understand when I say she crept into my heart and stole the key. I could not begin to describe my love for her. It was as though we met again after some long time—we belonged together. The ensuing years were filled with love, happiness, but also pain and heartache, as we struggled to bring good health to our girl.

Gradually, very gradually classical veterinary homeopathy helped and Sarah began to blossom again. Still often in pain she became BrightHaven’s sunshine—adored by all for her sweet and gentle ways and enduring and uncomplaining manner. She ate well, even though it often pained her, and gained weight.

Through the process of her care I learned so much more about natural healing, love and life and was thrilled when the day came that Sarah showed us that she was well. I remember that weekend so well as she wandered the house, proclaiming her wellness and happiness to all. It was a dream come true and everyone was ecstatic. Call it a healing crisis that she could not survive, call it nature’s way, call it what you will. Monday morning Sarah awoke and vomited. She then lay down to die. Her liver had failed and there was nothing more we could do. The shock was awful and I prayed for a miracle. I could not bear my pain.

That was only the beginning of our journey of course…Every day for a week Sarah dragged herself to room after room and each day in her appointed space she would rest, surrounded by cats and dogs— and me! They would sit or lie in a circle and communicate. Only I could not understand the lessons. Sarah was clearly holding court and teaching, or passing on her legacy. We knew not what. But for that whole week she laid aside her personal issues and pain and the magic of her word echoed throughout BrightHaven.

That Sunday was a day never to be forgotten. It was the day Sarah died. She began her journey early— in my arms and after three long hours of trying in vain to leave the useless vehicle of her body, Sarah was still alive—barely. Richard tried to comfort me in my misery. Neither of us knew what to do, let alone understood what was happening. We only knew that she could not, would not leave. It was as though her body was dead but she still lived inside.

This was before the days of natural dying at BrightHaven and of course another time when we could not get veterinary help to euthanize her. Finally Richard persuaded me to call Vicki, our animal communicator friend, who had taught us so much already and knew about these things. Vicki, on the telephone, took charge immediately.

She sternly instructed me to pull myself together and think of Sarah. She told me that I had to let her go, both mentally and physically. We were joined, tangled and intertwined and the separation had to be made. She made me understand that it simply meant that Sarah could then be free of her useless physical body and be with me in another way. I was none too sure—but listened attentively between deep racking sobs.

Vicki talked me through a process of letting go, so that Sarah could let go. She talked of spirit and physical bodies, and called upon angels, seraphim’s and cherubim’s. I had to envision a silver cord joining us both, from my heart to hers and then another from our umbilical chords. Once I believed I could visualize the cords, she told me that I would have to cut the one joining us umbilically, and then visualize the heart cord stretch to eternity and, at that point we would be joined forever. Vicki said that, on the count of three, Sarah would leave. Her body lay limp in my arms—I watched as Vicki counted, my heart filled with anxiety.

One…, two…and then it came…THREE—at which time I envisioned the cord cut and watched the other stretch and stretch and stretch…and in that instant Sarah opened her beautiful eyes, gazed lovingly and deeply into mine and left our world.

At that time we had no understanding of the world of energy and how we might all be a part of all that is, in oneness. All I knew is that Sarah had been a part of an experience so profound that we would be joined together for life and that Sarah would lead the way for us.

Some time after this event Richard, working at the stables had a sudden rush of words jump into his mind and ran for paper to channel the following message from Sarah:

I oft-times wondered if there was a place like here. Where food and kindness always came and noone lived in fear. A place where light shone from within and caused a misty haze Where horses, cats and dogs and birds, would bark and run and graze. If only we could tell the world: if only they wished to know That health and strength and growth and peace, abound where love can flow I had to leave this place so soon: I had much work to do Not many ever live this dream: only the chosen few So, think awhile and touch your soul: please take another glance It may be that the magic found will be our only chance.

0
0
0
0
0
0
Copyright: This document is © copyrighted and is the property of BrightHaven Inc. and it must not be reproduced or presented for commercial purposes without prior express written consent from BrightHaven.
via Constant Contact