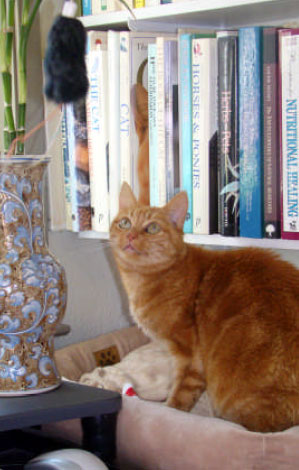 In her late teens, Carrie had reigned as queen of our BrightHaven clinic since her arrival in May 2010. Although originally rescued from a Bay Area shelter and placed in foster care, Carrie managed to find her way to BrightHaven by behaving quite badly in her foster parents’ home by demonstrating a lack of respect for some items of clothing by using them as a toilet. NOT a good thing to do and pretty much guaranteed to seal her fate!

Once ensconced with us, Carrie promised to be a better girl, but told us quite emphatically that she would be unable to share a room, let alone the whole house, with other cats. Just impossible for me she implored…..and so she moved into the clinic and made it her domain. Carrie was not endowed with a glorious head of red hair for nothing and so heaven help the daring feline who occasionally sauntered in!!

Now, humans are another matter, she said, and many volunteers and BrightHaven seminar students, were soon to discover that they only had to sit down to have Carrie slide happily into their lap for whatever treatment was to come her way. She touched the hearts of many as she shared her love and taught them in turn, just how to relax and live in the moment, as animals do.

Although In chronic renal failure, Carrie responded really well to homeopathy under the expert care of her veterinarian Dr. Francie Rubin, but several months ago it became clear that she really needed a dental surgery to alleviate a painful condition in her mouth. Sadly, Carrie’s kidneys were not terribly strong and, after the unavoidable surgery several months ago, they declined rapidly.

Carrie rallied beautifully several times under Francie’s care, but Mother Nature finally led the way and Carrie progressively weakened and slipped slowly to new life. Her transition was slow and easy, over several weeks, and it gave us some precious time, special moments and beautiful memories to treasure.

Silently one by one, in the infinite meadows of heaven, blossomed the lovely stars, the forget-me-nots of angels.
–Henry Wadsworth Longfellow 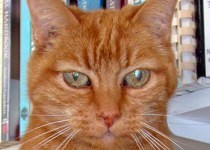 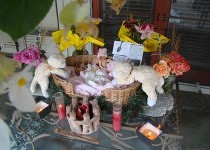 Carrie in her basket