Pepito, Lady Di, Mr. Magoo and King Tut became one of the most precious and special feline families to have ever dwelled at BrightHaven. Two weeks ago you may recall the death of Mr. Magoo and yesterday at 9:20am we bade farewell to dear little Miss Diana.

Several weeks ago, when the family gathered together in love on the dining room table heated beds, we at first believed the tiny family boss and matriarch, dainty little sixteen year old Di, was the one dying. Tiny little Diana had been in heart failure for some long time, with fluid around her heart and in her abdomen. She also suffered long term renal and colon problems.

We knew the time was fast approaching when she would plan her departure. So, surprised we surely were, to discover that Magoo was the one whose time had come. Family members King Tut, Pepito and Di were joined by dear friends Rosie, Gabby, Joey and Johnnie to help Magoo. Little did we all know – or maybe some did – that Diana’s work was now complete and she would soon plan to follow her brother to the light.

Once brother Magoo-goo was lying in state surrounded by flowers and mementos, Diana took her queenly place on the group’s favorite bed, the dining room table, and opened court. Other cats gathered close and her long journey to the stars began, supported daily by Diana’s own classical veterinary homeopath, Dr. Diana Bochenski. The two Diana’s had been together since Di’s arrival at BrightHaven. Two nights ago Richard was terribly touched and honored when Diana came to lie on his chest during the night as he relieved me for a rest during our vigil. Then the next night Di came to my makeshift bed in the living room and stretched comfortably across my chest too. How blessed we were!

Joined by friends and family in life and death – there was Gabby, Pepito, King Tut, Joey and Rosie. As we lay for two precious hours in peace and love, I longed for a camera to record the sweet episode but none came, and soon Di moved on to a new bed. Precious moments. During her last night Diana had become too weak to walk, and so I took her to my own bed and her night was spent in my arms with SuzyQ, Joey, Neill and Sophie in attendance. Di remained at a low level all night and I expected her to leave at any time…but no…..she waited.

She waited until Vicki, Blanca, Fray, volunteer, Mandee and I were all present, and then let me know with a tiny gasp that her time had come… I gathered her into my arms and, with Blanca tenderly holding her paws, she began the final part of her transition. The peaceful scene was only interrupted by the telephone as Richard called from Canada to check on his girl.

Some may believe that to be a coincidence….! One way or another she clearly wished for all her family to be with her in love at the end. Please join us by sending love, prayers and Reiki, as we celebrate the lives of Diana and Mr. Magoo and also lavish love and condolences on King Tut and Pepito who, for the moment, are feeling more than a little lost. 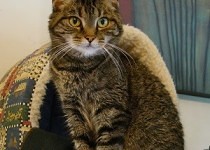 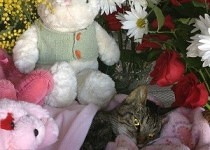