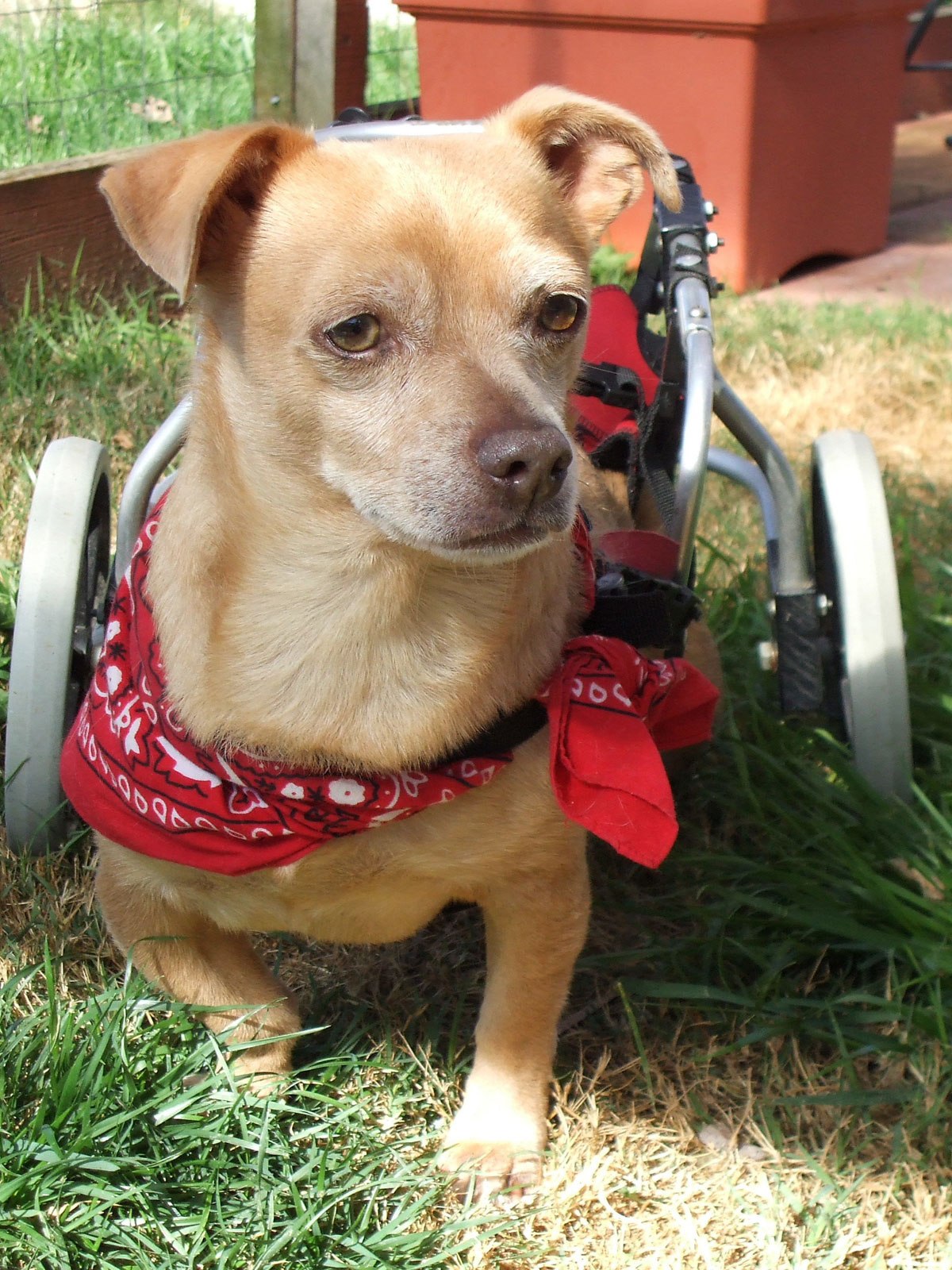 This little note comes to tell his friends of so many years that the BrightHaven sheriff, dear Joey, passed away Saturday evening shortly before 9pm.

Joey came into my life eleven years ago and, after receiving his first set of wheels, proceeded to take over daily BrightHaven life to rule the roost – well me mainly!! Joe was an outspoken Chihuahua who never minced words and always took life at full speed – in his chariot. He soon became my shadow and anyone who’s visited BH over the years will have seen us together – with him shouting his orders! He filled my days and spent his nights on my bed.

Joey became paraplegic at just over a year old when he was hit by a car after escaping the family garden….he came to BH shortly afterwards and over the years suffered the kinds of illnesses well known to paraplegics – mainly those of bladder and kidneys, although he also had some neurological issues affecting his spine and neck. Lucky to have the renowned Dr. Jeff Levy as his veterinarian, Joey fought off every illness – even those with long-lasting and dangerously high fevers. This dog was here to stay – and I guess I thought he would, forever!

Joey supervised everything and everyone and touched the hearts of many, although none more than perhaps his favorites – his Auntie June who came twice weekly to walk, spend precious time, and take him on outings, and Kathleen (Animal Reiki Source) whose Reiki classes he never missed and would curl contentedly in his bed at her feet.

He whispered to me once that he had to be on duty there for her in case she needed his expert help!
And to prove it here he is, proudly being blessed by Lama Kunzang Dorjee Rinpoche of Bhutan.

 About 6 months or so ago, we noticed his fur greying and then beginning to turn white (much like mine) and his energy slowing along with his step; then one day realized he was an old man and the tides of time were beginning to catch up.

His was a very gentle hospice journey which he undertook with dignity and style and when he could no longer even scoot and only had strength enough to sometimes sit up, Joey was transferred to a waist high wheeled bed, which was perfect for his quite demanding care.

Night time always found him snuggled in bed with Richard and me, but it was Tarka and Rosie who stepped up in the last days to help, cuddle, care for and comfort him all night long. Rosie has long been a BrightHaven midwife to the dying, but Tarka? When Tarka first pushed between us I thought briefly he was jealous and about to bite Joey…but no, he turned his back to me and proceeded to cuddle Joey with his paws.

I guess I never really believed he could die, but die he did last night and I am bereft. No more barking, no more rattling of his wheels as he chases after me, no more barking for treats.
Joey lay in state for three days looking as handsome and debonair as he would wish. From now on he will dwell in that special place in my heart, until we meet again – perhaps in my dreams for now…

Death is not the extinguishing of the light… it is the putting out of the lamp because
the dawn has come. ~ Indian Poet Rabindranath Tagore 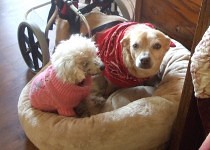 Joey and lily in the bed

Joey and a friend Oliver