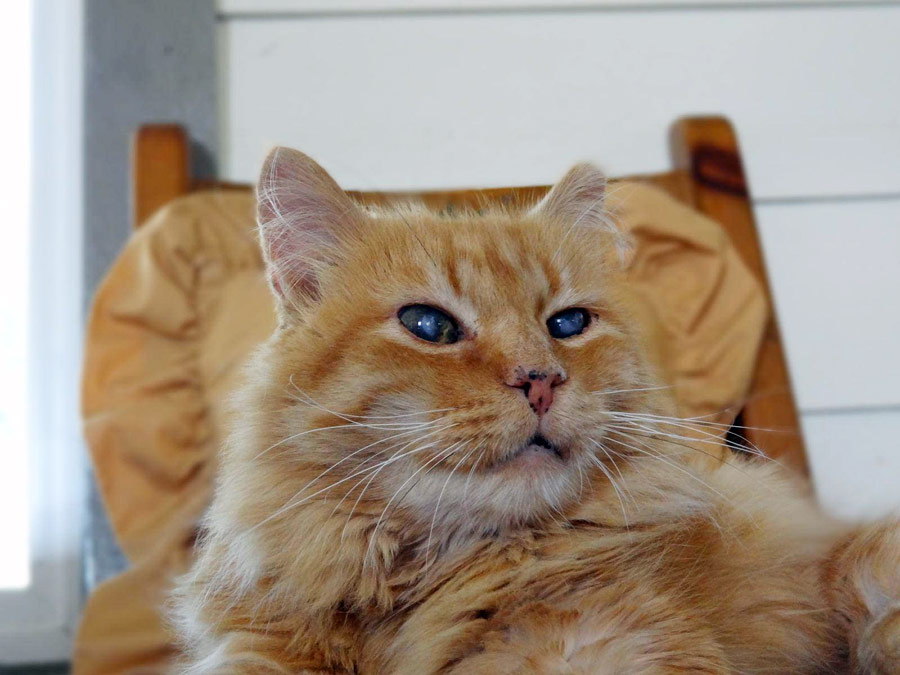 Today at 2:07am, we bade farewell to BrightHaven’s much loved “absent-minded professor”, Mr. Magoo.

Magoo had many names – Goofer, Goo-goo, Goo-man, Senor Goo—–man, Goof and on and on. Those who knew him will remember his quirky personality and feisty nature, which only served to make this short- sighted man more lovable. Seminar attendees will no doubt fondly remember him for his escapades in stealing food, mostly cheese or creamy cakes from the table at break times, and his very distinct annoyance when interrupted!

Magoo, in his third decade, FIV positive and in long term renal failure, finally developed an abdominal mass which was to take his life. Very often towards the end of life, we see groups of friends or family animals gathering in support of one who is entering their dying process, and so when we saw Mr. M joining his feline family more often on the dining room table heated beds, we thought him there in support of his sister, Diana.

Diana had recently developed heart failure with fluid in her heart cavity and abdomen, as well as some colon and urinary troubles too, and we knew her time to be fairly short. Magoo did not seem ill at all, and so imagine our surprise when he simply stopped eating and lay down very comfortably and peaceably to await his end. Of course we did everything possible to discover the cause and help him to stay longer, but it seemed Magoo was adamant and when we discovered the very large mass in his stomach, we realized why.

Magoo was ill for only a very short time but that time was well spent resting near to his closest and well loved family – Pepito, Diana, King Tut and dearest friends Rosie, Neill, Joey and lately, Gabby too.

Yesterday our supervising veterinarian, Christine Barrett DVM, who was also Magoo’s own vet, came to visit her favorite man and spend time at his side. Chris’s talented prescribing had worked wonders through Magoo’s life with us and would help him to remain peaceful and calm throughout his journey, and his death in my arms this morning was all that one would wish for themselves.

Magoo lived a good, long, three year life with us at BrightHaven, and before that was much loved by his elderly rescuer Agnes, for he was originally taken from the streets and nursed to better health by this special lady. After her death, Goof, Pepito, Diana and King Tut were bequeathed to us by Agnes to receive our special care.

His transition leaves a large hole in his BrightHaven family and our hearts, and we hope that maybe, just maybe, he is now languishing once more in Agnes’ arms.

Candles everywhere are burning brightly to light the way for Mr. Magoo’s journey.

When the mind is stilled in dreamless sleep, It brings rest and repose to the body. Just as birds fly to the tree for rest, all things in life find their rest in the Self. 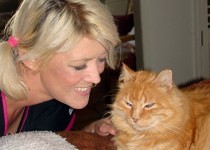 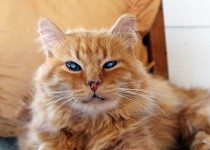