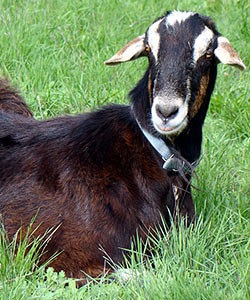 There would not be a single person I am sure, who would not applaud my use of the adjective “dear” when referring to Mr. Murphy, for his essence was very dear and wise, and one only had to be present in the gaze of his deep and steady eyes to recognize a being perhaps more greatly evolved than we. Now, please do not mistake me here—this wise and steady man had character, strength, determination and all the stubbornness of the old goat he was!

To wander back to the day we met now though, and a very sad, but very exciting day for us all that was. Mr. Murphy’s owner, a neighbor of ours, had recently died and his family was gradually relocating all his horses. No one knew what to do with the old and crippled goat that had been his dear friend.

Who would take in such a one?—no one in their right mind obviously!! And so when our equine veterinarian, Tere Crocker was asked for ideas and help, she knew immediately where to find the solution! Me? A soft touch? Pouf…

And so came the day when Tere and her daughter Cassidy came by to help us collect and transport Mr. M to his new home—no mean feat—as he could barely walk and we werequite nervous that he could be easily hurt. Happily the move went smoothly, with M riding our golf cart in grand style!!

In those early days Murphy could hobble a little on his Deformed legs, but as the days rolled by he became more incapacitated, although his general health responded well to homeopathic care courtesy of his other vet—Dr. Laurie Lofton.

The other goats, Dorothy and Paloma, soon accepted their new brother—or maybe father figure perhaps, and the three spent many happy hours grazing alongside Harley their huge pig friend. Fray, who cares for all the outdoor animals, soon had to change the rules for feeding though as she saw poor old Murphy routinely losing his dinner to the greedy pair of new sisters!!

It did take a little time for Murphy to become used to the new humans in his life and we wondered at first why he seemed more comfortable with the men and almost scared of us ladies… until we realized that he had spent all his life in the care of one man only and had probably never had any dealings with women. So we gave him love and allowed his boundaries until we were deemed more trustworthy and were allowed into the inner sanctum of his heart—along with the many bananas he devoured along the way!!

In the ensuing months as Murphy became more incapacitated, I developed the habit of visiting him early in the morning to take treats and this became a special time for all four of us to spend together before the sun came up. Sadly, the beginning of December brought the death of Paloma after a long illness and so Dotty and Murphy became a pair. The days and months rolled by and Murphy, after a period of walking on his front knees to graze, became bedridden in his straw filled home.

Food, water and love were delivered on time mostly (he said!), and Murphy remained comfortable, surrounded in his calm and guru-like energy. One surely felt blessed after time spent sitting beside him. One sunny and bright afternoon saw his collapse, and subsequent death two days later. Both Drs’ Tere and Laurie worked feverishly to try to help or determine what was going on…perhaps a stroke was their thought as Murphy’s legs seemed not to belong to him any more. That first night Richard and I piled up the straw and with many layers and sleeping bags, settled down to pass the night hours away as a threesome.

Initially Murphy seemed a trifle confused to find my face looming close to his as I lay right beside him, occasionally reaching out to gently stroke his soft fur but later, after I had dozed awhile I suddenly stirred, feeling his hot breath as he gently nuzzled my face all over. What a truly special moment that was. His journey remained peaceful as he continued eating along its path to the next day, but, on popping in to see him around lunchtime, Fray observed Mr. Murphy laying on his side for the first time. She came to get me and by the time we returned just a minute later, Murphy had relaxed into that deep and peaceful slumber from which there is no return. 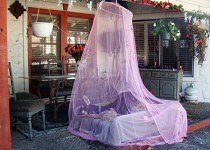