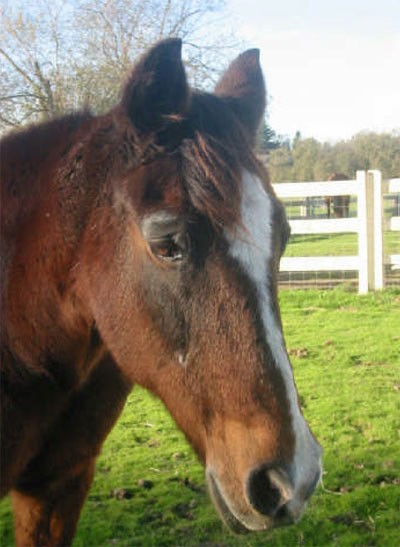 Gosh, to write in memory of Nicki would mean writing a veritable book (!!!) Nicki died at the grand age of 37 years, after taking us all on an incredible hospice journey our first horse to take us all the way to a beautiful natural conclusion to life and for that we will forever be grateful.

Nicki came to live with us at BrightHaven in Trabuco Canyon in October of 2000 with her best friend Daisy. The two settled in well with our horses Copy and Babe and when Bellestar arrived, a team was formed!! Already a senior, Nicki had some health problems, but none that could not be overcome by love, diet and homeopathy, as offered by her vet, Dr. Laurie Lofton. All Nicki really ever cared deeply about in day to day life we saw, was Daisy, her forever love. Where Daisy was—so was Nicki—and so it was. The years sped by and Nicki made the move from Southern to Northern California—to Kenwood, and from thence to our current home in Santa Rosa.

The days and weeks sped by and Nicki made friends with everyone who stopped by to visit. Sensitive and sweet, she made everyone feel welcome and many left feeling stronger somehow as they saw how she greeted each day with a bright and happy spirit although she clearly lived in a failing body that often let her down, sending her tumbling to the ground.

Over the years it became the habit of Richard and Fray to take turns to visit Nicks at 2am to be sure she had not fallen down and was unable to get up, for she could not on her own scramble back up again and needed human help.

There has been much written about this wonderful spirit who adored all and any form of energy medicine. She loved it so much in fact that it became a constant source of amusement at Reiki seminars, when Reiki teacher Kathleen Prasad was well-known for standing in support of dear Nicki throughout every class and practice, as Nicks would gladly soak up the Reiki.

It was never offered directly or hands on to her, but somehow she always managed to soak it up and very soon began to sway. Happily, Kathleen was always there to bring her back to earth again!

For now though, I would like to pay homage to the special being who changed my life in seven short days, as she eagerly welcomed me into her life and showed me how little difference really in the grand scheme of things there is, betwixt cat, dog or horse. Silly thing to say in some ways, but I had never been raised or mixed much with horses along the way—they were always Richard’s passion—and I was so busy with the cats and dogs of BrightHaven, that my life with the horse folk was severely limited.

As time progressed and my work led me deeper and deeper into the world of animal hospice and for us in particular the process of natural dying. I became more fearful that Nicki may soon be leaving this earth and how on earth would we, or could we cope with her journey?

For the most part my fears surrounded the thought of her colicking and being in severe pain, and us being forced into the euthanasia decision with no other option available for her comfort. Horses are sooo large—at least that was all my mind could really think back then.

Nicki indeed did colic during those days of hospice, but was saved by dear friends Daphne Livoni and Jaynellen Kovacevich, who worked their magic with TTouch and other energy healing to keep her comfortable until the colic passed. Time marched on, and our fears grew again of what might befall her next, but Nicki remained tranquil and accepting until I finally realized she was showing me that she was following the very same path towards the light that all other species follow.

Because of her great size I guess I thought things would be different, but no. She laid her large head in my lap and we would talk, and time would pass. We all spent many happy, and yet sad hours in the company of this amazing teacher with such kind and wise eyes.

Nicki showed me that we are all beings no matter how large or small—we all possess the very same feelings as each other and all offer to share the same deep love. She died slowly and gently and in the same manner as any small being in my house. We lay in the great outdoors together and, of all things—she shared her learned counsel some-times and her sense of the nonsensical at others.

She demonstrated her profoundly wise and gentle spirit as she led me through the journey of the end of her life and for that I shall forever be grateful. Now I can say with honesty that I do understand horses better, hold them in reverence and hide no fear—for now they know me, as now I know them.

After Nicki’s death I went across to visit Daisy, Paris and Belle. Daisy wanted to be alone, but Paris and Belle came to me to stand quietly before me, heads bowed. Then Belle lifted hers as I leaned down—and kissed me gently on her cheek.

I would like to leave you with the story of the moment of Nicki’s death in Richard’s arms – something which neither he, she, nor any of us will ever forget.

It was 6:30 that morning. I had gone indoors to begin my morning rounds of expressing bladders and tidying up after dear Panther’s death the night before, leaving Richard lying beside his lady love on the ground, arms wrapped around her neck. Nothing had changed overnight it seemed and, when I left, Nicki was lying peacefully, after a sip or two of water, her head cradled in Richard’s arms. I turned on my computer to print the Daily Treatment chart for the day ahead and it was then the phone rang. Picked it up to hear Richard’s muffled gasp, ”She’s leaving—hurry”

I surely did, but by the time I arrived Nicki had left her body, although I could still feel the warmth of her sweet presence. This is the story Richard told me:

“When Gail left, I settled down, comfortable in my vigil, with arms wrapped lightly around Nicki’s neck and my head resting gently thereon. We were at peace there together in the still early morning cold air.

It was then that I suddenly became aware of a single grey dove, who had landed just a few feet away from Nicki’s great head and seemed to be gazing right at us both alongside her on the ground.

Time passed, until eventually the dove turned and gently flew westward, toward the horizon whilst we watched with never a movement, until she could be seen no more.

Suddenly, Nicki leaned her great head back and around to stare deeply into my eyes for several moments. She then turned her head again in the direction of the dove, at which time her legs began to gently run. She looked back one more time, intently at my face—turned again—and left…forever.”

Her departure was just that—swift—soft—gentle—a sigh—all that one could ever wish for as a demonstration of natural dying in peace, comfort, with dignity, and as intended by Mother Nature.

“Fly free and happy and across forever, and we’ll meet now and then when we wish, in the midst of the one celebration that can never end.” –Richard Bach

This should be the end of the story, right? Wrong!—this was a magical moment in time and, of course there is more! I would like to share with you the ceremony we learned from, enjoyed and shared with, our friend Jaynellen Kovacevich. Jaynellen is a TTouch practitioner, as well as teacher of children and adults too, as she practices many forms of energy healing. We are always a ready and willing audience as she delights in sharing the wisdom of sages and animals in her many amazing stories of love, courage, transformation and healing.

Our story began, as one evening shortly after Nicki fell down, the rain was falling hard and fast and we were lost for help and equipment to shield our girl from the night. Jaynellen coincidentally was just climbing into her car in Marin to head for home, when she had a “feeling” she should come to BrightHaven instead.

Being one to never ignore those kinds of thoughts, Jaynellen arrived to share our journey—and what an amazing help she was to us that night—and many more too, as she always arrived just when we needed her most! Here though, I want to share with you the special ceremony she shared with us just several hours after Nicki’s death.

We were physically tired and emotionally depleted that afternoon as Jaynellen arrived. She proceeded to cheerfully gather us all up, do some smudging of the house, and then escort us all outside to sit beside Nicki. We had created a resting structure to protect and cover Nicki where she lay, and it, in turn was covered in greenery, swathes of beautiful netting and feathered totems.

It was a truly beautiful scene. Jaynellen then led us through the Lakota Indian traditional prayer flag ceremony, which she had been privileged to learn from a wise Lakota Chief. The ceremony is given in honor of those passed and she explained the meaning of the creation of the individual flags, their colors and contents, such as tobacco, grass, sage, sweet wheat grass, Nicki’s hair and more….The finished flags now hang high in Nicki’s favorite tree as a sign for her to come visit, eat and spend a while.

And so, after our inspirational and spiritual experience, we all sat and reflected in peace and tranquility and we knew we had been blessed by a very special horse named Nicki who was sent to teach and demonstrate to us how to open our hearts, minds and our very souls to life, and realization. The moment the grey dove came to collect her, and the look Richard saw in her eyes when she turned to him that one last time, shouted loud and clear with love and passion: “NOW YOU UNDESTAND WHY I WAS HERE AND WHY YOU WERE HERE TO LOVE ME!”

May the Great Spirit watch over you, and may you be at peace. 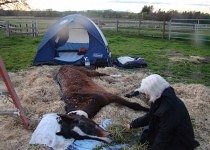 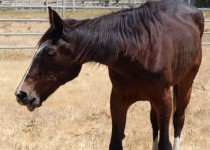 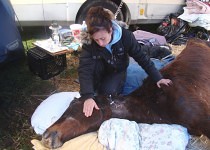 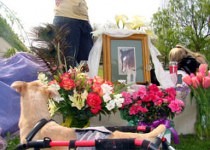