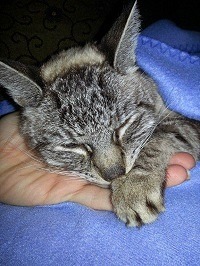 Although at BrightHaven for two years, the sweet, gentle, dignified and reserved William rarely invited us close to his grieving heart. In the last couple of weeks though, he finally opened, accepted and allowed me in and now what a wrench it is to bid farewell to my new love.

Let us look back a little in time to William’s arrival from a shelter where he and his sister had been left by his family – we believe it to be after the death of his beloved guardian.

Someone came and adopted his sister, leaving him bereft a second time. You can imagine the loneliness and defeat of his spirit, made all the worse by his very severe inflammatory bowel disease, which caused uncontrollable diarrhea. William must have wondered if he did something wrong to be forced to lose all his family and, for a long time remained aloof, lonely, scared and depressed, choosing to sleep in a bed high up in the BrightHaven office.

Gradually he warmed somewhat as his heart began to heal a little and he sought solace on the office desk beside Vicki or me. William loved the garden and the sunshine and spent many happy hours sunning himself in the gazebo. Being declawed, one wonders if he had ever been outdoors like this before.

Time passed as his wonderful veterinarian Dr. Michele Yasson did all she could to help heal this sweet boy. William had small remission after remission and each time we prayed for him to be healing for a better future, but it was not meant to be. Two weeks ago, when he came out of the office during the daytime to seek companionship with Pepito, Rosie and Neill, we realized his time with us was coming to an end. It was bitter-sweet to see William as a family member at last even though time was to be short. His voracious appetite dwindled gradually as did his love of an early morning drink of milk as Richard made tea and finally he lay down to begin his transition. The other cats left and this became the time when he invited us in and of course we came most willingly!

Several nights ago Richard and I started taking turns to monitor him all night as he became a little restless. Then last night, as he was close to the end and unable to walk, I took him to bed with me and he lay all night in the crook of my arm. A slight head movement in my hand and a stroke of a paw against my other hand was my only indication that he was present with me. We lay all night, talking of things past, present and future – at least I did!

William lay peacefully listening with a sweet and tender smile, perhaps in anticipation of his beautiful journey.

He was so close that I knew he could have left at any time and finally at 6:15am I told him that I simply had to get up and go shower for the day ahead. I hated to leave him. Once again I was shown how beings can die just when they wish – as William immediately took a few very tiny, soft breaths and two small stretches of his hind legs – and he was free of his old and tired body almost before Richard ran into the room to be with us.

As William died I looked at my cell phone, which is always beside me as my alarm and perhaps for me to call for help if needs be – and it was dead, completely dead. I had checked the time just minutes before. A coincidence perhaps?

Or, perhaps William needed a little extra energy to leave so sweetly……

“When the mind is stilled in dreamless sleep, it brings rest and repose to the body. Just as birds fly to the tree for rest, all things in life find their rest in the Self.”